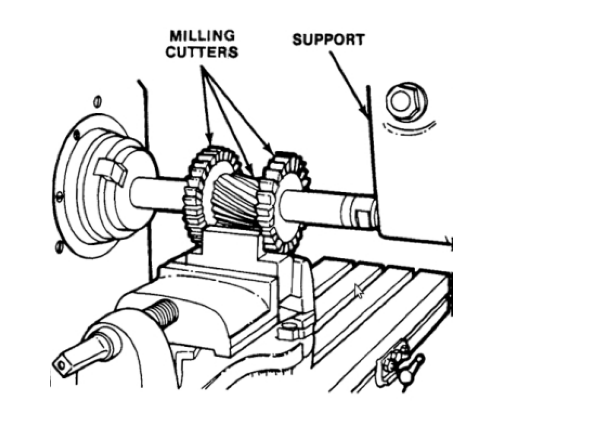 The side milling is the production of a flat vertical surface on the side of a work piece by using a side-milling cutter. The depth of cut is adjusted by rotating the vertical feed screw of the table.

When two or more parallel vertical surfaces are machined at a single cut, the operation is called straddle milling. Straddle milling is accomplished by mounting two side milling cutters on the same arbor, set apart so that they straddle the workpiece. The diagram below illustrates a typical example of straddle milling. In this case a spline is being cut, but the same operation may be applied when cutting squares or hexagons on the end of a cylindrical workpiece. The workpiece is usually mounted between centers in the indexing fixture, or mounted vertically in a swivel vise. The two side milling cutters are separated by spacers, washers, and shims so that the distance between the cutting teeth of the cutters is exactly equal to the width of the workpiece area required. When cutting a square by this method, two opposite sides of the square are cut, then the spindle of the indexing fixture or the swivel vise is rotated 90 ° and the other two sides of the workpiece are straddle milled.

The term applied to an operation in which two or more milling cutters are used together on one arbor when cutting horizontal surfaces. The usual method is to mount two or more milling cutters of different diameters, shapes and/ or widths on an arbor as shown in the following diagram. The possible cutter combinations are unlimited and are determined in each case by the nature of the job.

The process of machining special contours composed of curves and straight lines, or entirely of curves, at a single cut. This is done with formed milling cutters, shaped to the contour to be cut, or with a fly cutter ground for the job. The more common form milling operations involve milling half-round recesses and beads and quarter-round radii on the workpieces. This operation is accomplished by using convex, concave, and corner rounding milling cutters ground to the desired circle diameter. Other jobs for formed milling cutters include milling intricate patterns on workpieces and milling several complex surfaces in a single cut, such as produced by gang milling.

When setting the depth of the cut, the workpiece should be brought up to just touch the revolving cutter. After a cut has been made from this setting, a measurement of the workpiece is taken. The graduated dial on the traverse feed is then locked and used as a guide in determining the depth of the cut. When starting the cut, the workpiece should be moved so that the cutter is nearly in contact with its edge, after which the automatic feed may be engaged. When a cut is started by hand, care must be taken to avoid pushing the corner of the workpiece between the teeth of the cutter too quickly, as this may result in cutter tooth breakage. In order to prevent time wasting during the operation, the feed trips should be adjusted to stop table travel just as the cutter clears the workpiece.

Here, the milling cutter overhangs on the workpiece on one side only.

End milling primarily differs from other milling processes due to the type of tooling that is used for abrading a given material. Unlike cutters and drill bits, end mills have cutting teeth on the sides and end of the mill. Additionally, the milling applications for the end mill are unique. End mills are typically used in applications requiring profile milling, tracer milling, shape milling, face milling, and plunging. This operation is used for non-conventional non-conventional or unique applications,

This is similar to end milling in which the outer side periphery of a flat part is machined (milled).