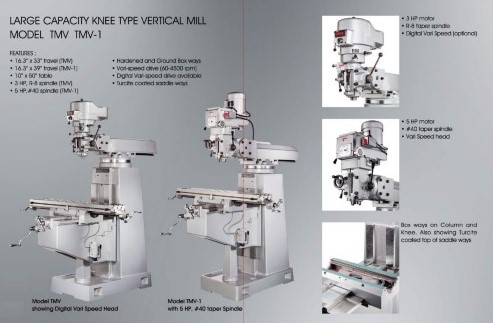 Milling is a process of producing flat and complex shapes with the use of multi-tooth cutting tools, which are called milling cutters, and the cutting edges are called teeth. Unlike lathes, which have been known for thousands of years, milling-machine technology is less than two hundred years old. Because they require much more power than hand-driven lathes, their introduction had to wait for the invention of industrial water and steam power. Also, all their mechanical components had to first be made available, such as accurately fitted slides, large castings to resist cutting forces, calibrated leadscrews, and hardened steel cutting tools. Eli Whitney is credited with inventing the first milling machine about 1818, but the knee-and-column support arrangement of the universal milling machine of Joseph A. Brown (later of Brown and Sharpe) dates from 1862 and marks an important step in the machine’s development. During the last half of the nineteenth Century, milling machines gradually replaced shapers and planers which have lathe-type, single-point tool bits that move over the work in a straight line and scrape off metal one stroke at a time. Milling machines, with their continuous cutting action, not only remove metal faster than shapers and planers, they perform additional operations such as cutting helices for gears and twist drills. Today, milling machines greatly outnumber shaping and planing machines. Americans in New England, and later, the Midwest, continuously added features leading to the modern milling machine. Milling is one of the basic machining processes that facilitates the rapid removal of large amounts of material. Milling is a very versatile process capable of producing simple two-dimensional flat shapes to complex three-dimensional interlaced surface configurations. In all types of milling machines, the cutting tool performs a rotational motion, that is, the cutting motion. The rotation axis of the tool could be horizontal or vertical, depending on machine tool version. The feeding motion is achieved either by part or tool, or both, usually on three perpendicular directions.

Basics of a peripheral (slab) milling operation. Working of a milling machine is based on the fact that milling cutter is fed against the workpiece. This is achieved by developing relative motion with precise control between workpiece and rotating milling cutter. Feed motion is generally given to the workpiece through its holding device. The cutting mechanism of the workpiece in milling operations is same as that in turning operation on lathe. This cutting results from plastic deformation of metal by the cutting tool. The milling machine can also hold more than one cutter at a time. The holding device is supported by mechanism that can offer a selective portion of the workpiece to milling cutter for its processing. Indexing is one of the examples of this type of processing.