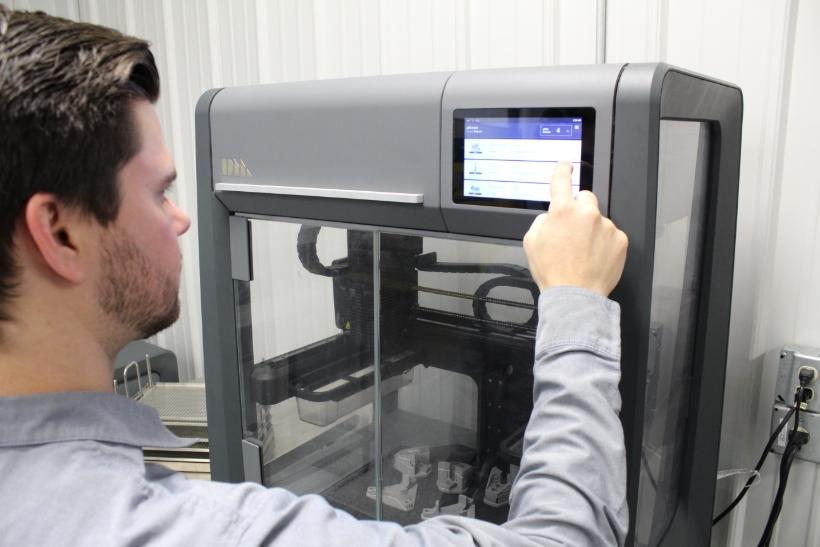 People have been using metal injection molding (MIM) and metal sintering for decades to produce high-volume, net-shape parts for various industrial sectors. Automakers and agricultural equipment manufacturers rely on powdered metal (PM) parts for exhaust systems, camshaft assemblies, and structural components, for example, while MIM is used for everything from pistol slides to the table trays on commercial aircraft.

Someone who can tell you all about PM applications is Nate Higgins, plant manager for Alpha Precision Group’s MIM division, who noted that the St. Marys, Pa., company’s three divisions have more than 50 years of combined experience servicing these and other markets.

What intrigues Higgins the most right now, though, are several entirely novel ways of processing PM. One of them—additive manufacturing (AM)—already has produced significant benefits for him and his manufacturing team, with more to come as they expand their new capabilities to APG’s customer base.

In July 2018 APG purchased a Studio System 3D printer from Desktop Metal Inc. It does not print with loose metal powders like those used to make PM and MIM parts. Instead, its feedstock is metal rods impregnated with a binder material, which the system extrudes into the desired shapes in a manner similar to that of fused deposition modeling printers. Unlike FDM, however, parts printed on a Studio System require post-build debinding and sintering, processes with which APG is intimately familiar.

Higgins does not anticipate using the system for customers’ parts, however. “I’m a little critical of the dimensional accuracy and surface finish, in that neither are on par with what APG can accomplish with MIM,” he said. “And while it might be a very viable solution for shops making prototypes and low-volume end-use parts, I have to say that we’re awfully good at tooling up for MIM. So by the time you tweak the build settings to meet the required part tolerances and then finish-machine any critical surfaces, we can probably deliver actual MIM parts instead.”

What he is using the Studio System for, and with excellent results, is 3D-printing tooling components for APG’s extensive machine shop.

“Chuck jaws is a big one, but we also make a lot of inspection gauges, coining and sizing dies, fixtures, and jigs, as well as lightweight end-effectors for our 6-axis robots,” said Technical Sales and Operations Manager Chris Aiello. “It’s given us the ability to test multiple design iterations quickly, with minimal investment in raw material and without having to tie up one of our CNC machines. Perhaps most importantly, it’s made us very flexible, and helps us to service our customers more effectively.”

The notion of 3D-printing end-of-arm tooling is particularly interesting for any shop looking to automate. Said Higgins, “We’ve had to make some fairly significant design changes to accommodate the additive manufacturing process, but, long story short, we’ve reduced the weight of the end effectors by around 30%, so it’s much easier on the robots. We’ve also developed some part geometries that would have been impossible to produce with traditional processes, and because we have the ability to print whatever we need in-house, there’s never the risk of unplanned downtime.”

Aiello added that the Studio System isn’t APG’s first foray into additive—not by a long shot. The company bought a Mark One continuous-fiber printer from Markforged in 2014, and today it has five 3D printers from the Massachusetts-based equipment manufacturer, including an Industrial series printer, all of which serve the machine shop.

“Between the Markforged machines and now the one from Desktop Metal, we can print tools from carbon-fiber reinforced nylon, fiberglass, Kevlar, and a variety of tool steels and have them on the shop floor in a day or two,” Aiello said. “It’s been a big improvement for us.” 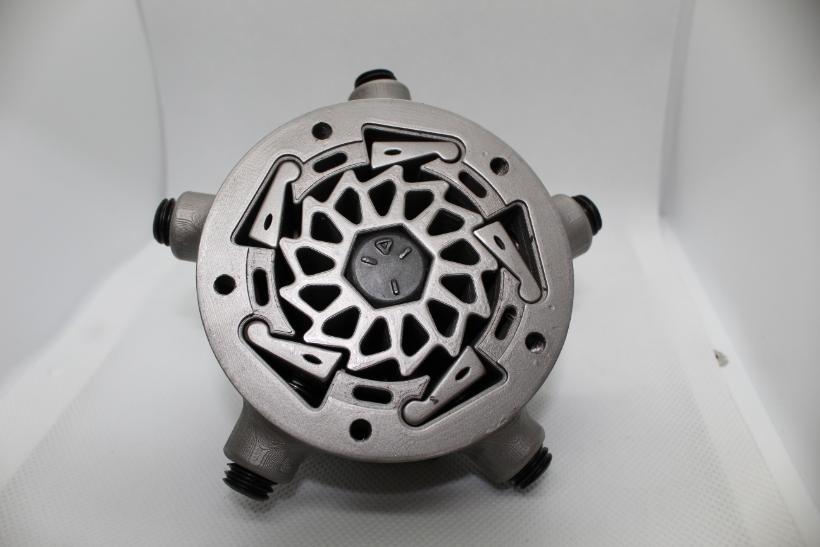 Manufacturing engineers at Alpha Precision designed and 3D-printed this mechanical assembly used to tighten and loosen Allen bolts on a workholding fixture fitted to a vertical machining center. Image provided by APG

Despite the success APG has enjoyed with its existing 3D printing equipment, Aiello and Higgins suggested that the path forward for the company is another new AM technology, one that will take 3D printing out of the machine shop and onto customers’ receiving docks.

It’s called binder jetting, and although the two managers are still exploring available options, they plan to bring binder jet capacity in-house during the second quarter of 2020.

“Probably 90% or more of our 3D-printed parts are currently for internal use,” Aiello said. “We plan to change that ratio as we move into binder jetting, which produces high-quality, fully dense metal parts much more quickly than competing technologies like DMLS [direct metal laser sintering] and SLS [selective laser sintering].”

Higgins agreed, adding that one of the coolest things about 3D printing is how it changes your way of thinking. “Bringing in the Studio System from Desktop Metal, for instance, has allowed our manufacturing engineers to think differently about their tooling designs and process flows,” he said. “Beyond that, it helps to secure the future of APG. AM is an extremely flexible technology and can be applied across a wide range of applications, a wide range of customers. So even though some in the MIM and PM industry might see it as a threat, we see 3D printing as a promising new opportunity and as providing us with a distinct leg up on our competition. For us, at least, there’s no going back.”