Software and processing algorithms measure deflection, displacement, movement, and vibration not visible to the human eye, producing an amplified video of motion. 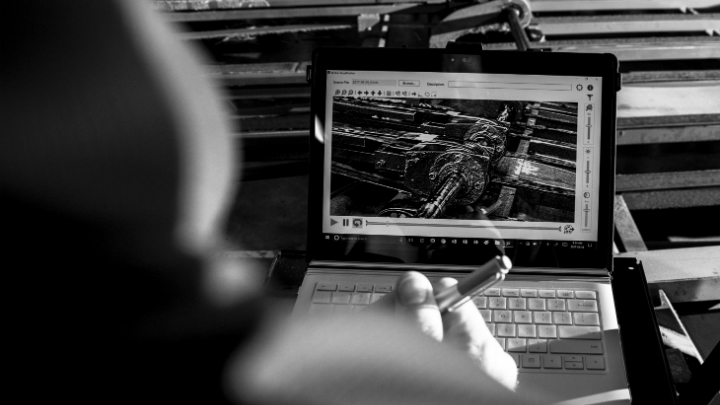 Since 1997, Allied Reliability (Houston, TX, USA; www.alliedreliability.com) has provided machinery and equipment maintenance services for several industrial and manufacturing sectors worldwide. Ultimately, according to John Schultz, Founder and Chief Innovation Officer, the company sets out to understand as much as possible about machines and components to help improve reliability and efficiency.

“If we can understand how every machine, every component, every part within a manufacturing plant or industrial setting operates and how it can fail and ultimately map test measurement inspections to those failure modes, we can achieve previously unseen levels of operational reliability.”

Schultz and Allied Reliability were among the first adopters of the system developed by RDI Technologies (Knoxville, TN, USA; www.rditechnologies.com), as CEO and Founder Jeff Hay was brought onto the payroll with Allied Reliability to pioneer the predecessor technology of the Iris M system and expose Hay to as many types of machine trains as possible.

In 2015, Hay started with RDI Technologies and developed Motion Amplification technology, a proprietary video processing algorithm that detects subtle movement and converts that movement to a visible level, enhancing the understanding of the components and what is causing the motion, according to the company.

“Our customers were able to relate far more to the visualization offered by the Motion Amplification technology than what they could with other available technologies,” says Schultz. “People started going nuts over the ability to show them a video of the exaggerated movements, from a visual standpoint.”

The Iris M system uses a monochrome USB3 camera with an IMX174 CMOS sensor from Sony (Tokyo, Japan, www.sony.com), a 2.35 MPixel sensor that reaches frame rates of up to 164.5 fps. The rest of the setup includes vibration pads, tripod, and lens options with 6 to 100 mm focal lengths. A USB3 cable connects the camera to an acquisition system based on an Intel (Santa Clara, CA, USA; www.intel.com) i7 processor that runs the imaging software. The system captures video of a machine as it runs. Software and processing algorithms measure deflection, displacement, movement, and vibration not visible to the human eye, producing an amplified video of motion. This enables the assessment of critical operations, processes, quality, and structural components that affect plant reliability and productivity, according to the company.

Data is collected at high frame rates (generally 120 fps or greater) to capture at speeds above the Nyquist Rate to properly sample the motions of interest. The process involves streaming video from the camera via USB3 cable at data rates in the range of 350 MB/s. This allows for high-quality data from which even the smallest of motions can be extracted.

Once received by the acquisition system, the data can be processed to amplify the video. This process occurs via proprietary algorithms that detect and quantify the motions, after which they can be amplified in the video to be discernable by the eye. Operators can choose on a linear scale from 1x to 50x amplification.

One of the biggest advantages of the system is that it uses non-contact measurement techniques, according to Schultz, who says that some clients in the past had to physically shut down an asset due to heat or safety concerns so his team could instrument the asset.

“Time is the number one issue with non-contact measurements,” he says. “The time of showing up on site to having something to show clients goes from days to hours with this technology. On average, we can do a better job of diagnosing a problem and put a better visualization in front of the customer in 20% of the time it used to take.”

Secondly, the ability to look at normally-inaccessble components and areas of a machine, to see what is going on with a shaft or a coupling, for example, is a monumental breakthrough in terms of understanding machine train performance, explains Schultz. The third advantage, he says, is the resolution.

“A 1 MPixel camera, for example, provides a million simultaneous data collection points, which provides much better data granularity than could be achieved with accelerometers or displacement sensors,” he says. “Using this technology allows viewing overall system performance and its impact on assets around it.”

While the system is most often used for the evaluation of the structural health of an asset, Iris M can also be used to improve product quality. For example, in a steel mill where the product contacts the asset, chatter can cause little indentations in the sheeted steel products. The Iris M system can monitor the process and help identify such movement so that actions can be taken in order to prevent defects.

Allied Reliability owns more Iris M systems than any other company using the technology, and does so in various industries including oil and gas, mining, automotive, pulp and paper, food and beverage, and pharmaceutical manufacturing.

“If the system identifies a scenario with too much movement or vibration, we then look into seeing if there is a fault in the machine,” says Schultz. “With defects, we use the Iris M technology to identify what that may be, and with resonance problems, our structural engineers use this data to figure out the reengineering required to move the resonant frequency.”

He adds, “For large complex structures with low and moderate frequency challenges, this is one of the best problem-solving tools I’ve come across since I started in this industry in 1990.”